Originally from Gardendale Al. which is just North of Birmingham, I currently reside with my family and perform in Panama City Beach, Fl. and surrounding area including venues in Walton County and even down into the Florida Keys with as well as many private functions/shows with various groups or duos. My wife, Jennye and I perform together as a duo, we moved to Panama City Beach in 1989 and have had the opportunity to play with alot of recording artists from all over the U.S. and abroad.

I also have also had the honor of sharing the stage with a few of my good friends including Barry Fish, Crook Stewart, Bruce Hebert, Ike Bartley and many more. We play a blend of Soul/R & B, Motown, Classic Rock, Reggae, Blues and Light Jazz. 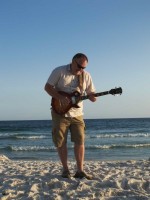 Other Interests: Fishing, Going to see other bands

PLEASE CHECK THE CALENDAR FOR SCHEDULE